Mongolia is centrally located between Russia and China. It is 603,909 sq mi (which is roughly twice the size of Texas), and has a population around three million people. Horse culture is integral in the life of Mongolians; the horse population is even greater than that of the people! Approximately 30% of the population is nomadic or semi-nomadic.

As far as religion goes, 50% are Tibetan Buddhists. Other than those that claim to be non-religious, the Shamanism population is the second largest group at 10%, and Islam is at 3%. 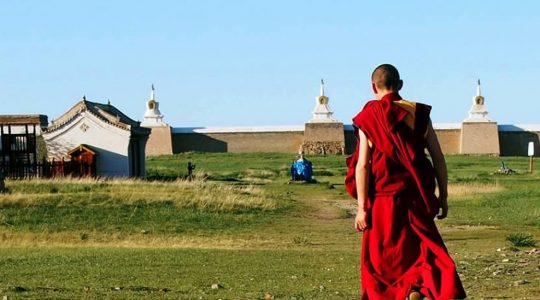 HISTORY: In 1206, Genghis Khan founded the Mongol Empire, which became the largest contiguous land empire in history. Shamanism was popular at that  time. Between 1760- 1911, the Qing dynasty maintained control of Mongolia with a series of alliances and intermarriages, as well as military and economic measures.  By 1911 there were 700 large and small monasteries in Outer Mongolia; their 115,000 monks made up 21% of the population. The Chinese emperor imported Tibetan Buddhism during this time. In 1924, the Mongolian People’s Republic was declared as a Soviet satellite state. Between the 1930-1940s, the communist party totally wiped out Buddhism and Shamanism in Mongolia.  After the anti-Communist  revolutions of 1990, Mongolia conducted its own peaceful democratic revolution in early 1990.

CHRISTIANITY: Christianity in Mongolia is a minority today at 2%, with around 700 churches in existence. Many  Christians in Mongolia became Christian after the end of Mongolia’s communist regime in 1990. But during the rule of communism  before 1990, there were no Christians, no churches, and no Bibles to be found in Mongolia. However, even though the Mongolian church is only one generation old, it is experiencing exponential growth. There were less than 40 christians in Mongolia in 1990, but today there are an estimated 50,000 Christians meeting in 700 different churches!

Although it’s a wonderful problem to have, because of this fast growth we have many challenges. A shortage of potential leaders, finances, manpower, and there are no churches in many rural areas. Due to the low population it did not take long for the good news to spread, so most Mongolians by now have heard about Jesus. But now the challenge is that we need more friendship evangelism. God has shown us that Church planting is now our next season for friendship evangelism.